The scholarship, named in honor of a founder of Pride In McAlester, commemorates Collier’s legacy as a charitable man who was dedicated to improving his community. Keep McAlester Beautiful awards this scholarship to celebrate exceptional students who exemplify KMB’s goal of beautifying and enhancing our town through volunteerism.

To be eligible, scholarship applicants must have participated in a leadership role in community service work and volunteer activities. They must also meet the following criteria of being enrolled as a high school Senior or equivalent, and have a grade point average above 3.0 on a 4.0 scale (or its equivalent); and planning to enroll in the Fall of 2020 as a full-time student in an undergraduate course of study at an accredited two or four year college or university.

Our next city wide cleanup will be April 2021. In July 2020, we saw over 1100 cars come through the gates at the former National Guard Armory. We helped dispose of properly 477,053 lbs of unwanted debris! That included over 17,000 lbs of paper to be shredded!

Keep McAlester Beautiful is excited to partner with the City of McAlester and the Parks and Recreation Department to launch Adopt-A-Park! Individuals, families, groups or businesses are welcome to choose one of the city’s 15 parks and public use areas. Volunteers can pick up litter, mow, weed eat, remove graffiti, report park hazards, sweep courts and pathways, pull weeds, care for the ecosystems and report illegal dumping, storm damage injured or dead animals and other hazards or help with major park restorations.

Parks available for adoption include:

Saturday evening, October 10th, we give you an opportunity to volunteer to help mark unlit street lights in 5th Ward. Join us with your vehicle and socially distance a volunteer chance. A well-lit city helps Keep McAlester Beautiful by promoting healthier and safer neighborhoods. Huge thanks to Public Service Company of Oklahoma for helping us coordinate! 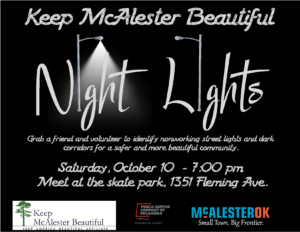 Twenty volunteers met at Michael J. Hunter Park on Saturday, June 27th 2020 and worked for a hour and a half to remove some of the glass litter from the park. The workday took place safely and social distanced. Keep McAlester Beautiful is actively working with the City of McAlester and other partners to find ways to eliminate the dangerous litter from the park.

Recycling in McAlester isn’t the most convenient process, but it certainly isn’t a challenge. Recycling is conducted by a wide array of citizens from youth to retired and from lower to upper class, numerous citizens see the benefit and and importance of utilizing the McAlester Recycling Center.

To show off how every day citizens recycle, we’ve delved into the homes of a few people to show that there isn’t one right way to collect and sort your recycling. Any system that works at your home is the right system.

This is the real recycling collection of a McAlester citizen. They use a corner of the garage to sort and store recyclables. Separate bins for newspaper, other paper and #1 & #2 plastics. A grocery sack for glass bottles and a garbage bag for tin cans. They also use a large cardboard box to collect cardboard. (They save the box when they dump the contents.)

They make drops at the Choctaw bin at Kiamichi Technology Center and at the McAlester Recycling Center. They only make a trip when the bins fill up – usually on a weekend.

This is another real-life example of recycling in McAlester. This family keeps their collection inside and sort by type, simply sliding the broken-down cardboard in back when needed. Once their recycling fills up, it gets hauled off to the McAlester Recycling Center at Choctaw and Main Street.

This family skipped the cost of fancy recycling container and simply reused existing containers. (Isn’t that paper basket awesome?!) They sort as they go and keep these containers in their garage. When they are full, they take them to the center. They also keep bags at the office & do the same. It takes very little time & their trash can is rarely full!!

Okay, I know this isn’t a real-life photo, but it’s pretty much what my recycling looks like at any given time. We collect all of our recyclables in a small red bin that sits in an otherwise unused portion of a counter top in the kitchen. Since we never prepare food in that area, it works in our relatively small home. The bin gets full every couple of days, so we simply sort it out into reused plastic grocery bags and drop it by the McAlester Recycling Center on the way to work.

Looking for a way to recycle that has a bit more character, look at this adorable internet find.

Does that appeal to you, but you don’t have the horizontal space? This vertical version is equally attractive.

One common theme you’ve probably noticed in most of these are labels. It’s true – if there are more than two people in your home and your plan is to presort your recyclables, you’re going to want to clearly label your bins to prevent cross contamination.  Besides, what doesn’t look better with a label?!

This is the recycling collection at the Pride In McAlester office. Yes, we have fancy collection bins that we received in-kind several years ago. If you’re into that kind of thing, a simple visit to the local home store will probably help you locate your very own blue bins for a lot less money that you’d initially assume.

The process for recycling in McAlester is pretty basic and we’ve condensed it into this helpful infographic for your quick reference.

As referenced above, there is also a Choctaw Nation Going Green Bin at the Kiamichi Technology Center, the Choctaw Nation Community Center, and Mann’s Flowers. They collect many items that the McAlester Recycling Center doesn’t currently accept.

Want more? You got it!

Still have questions about recycling? Call Pride In McAlester at 918-426-4444 or send us an email to pim@prideinmcalester.com.

I Want To Be Recycled

Imagine a shampoo bottle that dreams of becoming a hairbrush, a steel can that hopes to someday be transformed into a bicycle, or a plastic bottle that believes that, one day, it could become a park bench. These are some of the many destinies that could be fulfilled if more Americans took time to do one thing: recycle.

A public service advertising (PSA) campaign introduced by the Ad Council and Keep America Beautiful (KAB) aims to inspire the nearly two in three Americans who do not recycle regularly to make recycling a part of their daily lives. Despite increased visibility of public recycling receptacles and increased curbside programs, levels of recycling remain low at less than 35 percent.

The average American generates 4.4 pounds of trash per day and recycles or composts only 1.51 pounds. Think of all the hairbrushes, bicycles, and park benches that could be produced if all of that was recycled instead. As a whole, the United States produces approximately 254 million tons of trash each year and recycles and composts 87 million tons of this material, according to the U.S. EPA.

The Ad Council first partnered with KAB to address the issue of littering more than four decades ago. The result was Iron Eyes Cody — “The Crying Indian,” — one of the most iconic advertising campaigns in American history.

Our PSAs have a different goal, but one that is just as important: to waste less by recycling more. Our “trash” could go on to live a whole new life and serve a valuable purpose, if only more people would give it a chance.

Most recently, Keep America Beautiful and the Ad Council joined with Unilever to expand the conversation around recycling beyond the kitchen and into the bathroom as nearly half of Americans do not consistently recycle their plastic personal care products. This new phase of the campaign illustrates how products like shampoo bottles can be recycled and transformed into new products, like hair brushes, combs, and more.

Visit IWantToBeRecycled.org to get a behind-the-scenes look at how trash can be transformed through recycling, to debunk common recycling myths, and to find details about recycling locations near you. You can also find out how to give garbage a new life or learn how many times an aluminum can can be recycled into a new aluminum can by following our conversation on Twitter with the hashtag #berecycled or liking us on Facebook.

One team stayed at the park to clean and paint playground equipment, seating, and signage at the area dedicated to members of the 45th Infantry Division. Another crew of students traveled to Connally Park on North 12th street where they prepared and painted a guard rail that runs along the parking lot. The third team, consisting of fifteen students and the faculty advisor, went to the McAlester Public Library where they recoated a white guard rail with paint around the parking lot on East Adams Avenue. Each site was also cleared of litter during the workday.

Together, these high school students contributed a combined sixty hours of community improvement working to Keep McAlester Beautiful. Pride In McAlester provided the paint and supplies necessary to complete the project.

Pride In McAlester is a 501(c)3 nonprofit and Keep America Beautiful Affiliate. To learn more about volunteer opportunities and beautification efforts, visit www.prideinmcalester.com or call 918-426-4444.

This project was a partnership between the Buffalo Run Disc Golf Course promoters, the City of McAlester, Pride In McAlester, and McAlester’s Tree Board. City of McAlester Land Maintenance Superintendent Sherman Miller and Gardener Robbie Patton started the day with a demonstration on proper planting techniques. Volunteers then prepared the trees by removing containers, placing them at the proper height, filling the holes, and adding top soil and mulch donated by Lowe’s Home Improvement Store of McAlester to the base of the tree.

The trees were purchased by Matt House, local disc golf professional and designer of the Buffalo Run Course, with funds raised from tournaments. “This park and disc golf course is quickly becoming one of the best in the State,” House said. “I’m humbled by the community’s awesome support and willingness to help make it the best Park and Course in Oklahoma.”

Loblolly Pines, a native species that grow fast and is hardy to the condition of Southeastern Oklahoma, were planted for National Planting Day, which puts particular emphasis on planting indigenous trees throughout the United States. According to the Keep America Beautiful website, National Planting Day is a “call to action designed to mobilize Americans to support local ecosystems.”

Pride In McAlester is a 501(c)3 nonprofit and Keep America Beautiful Affiliate. To learn more about volunteer opportunities and beautification efforts, visit www.prideinmcalester.com or call 918-426-4444.